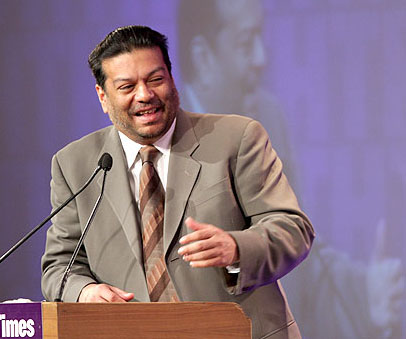 The name Vir Sanghvi resonates in our mind as someone who has displayed tremendous mastery in the field of journalism. Sanghvi who was born in 1956 has carved a niche for himself as a print and TV journalism, columnist and talk show host of the country, recognized worldwide. Whether amateurs or professionals, students of reputed mass media institutes in Kolkata or retired people, learning about this storehouse of knowledge with experiences galore, is something that everyone must know of. And it is inspiring, actually.

His early days were spent in Mumbai and college life happened in Mayo College, Ajmer. He later moved over to London, with the Mill Hill School having substantial impact on his career. He furthered his education at Brasenose College, Oxford after winning the prestigious Open Inlaks Scholarship to read politics, economics and philosophy. Besides these, he was equally adept at culture, travel, entertainment and not to forget, food.

While there’s no doubt that Vir is currently one of the most renowned Indian journalists of this generation whose career revolves around a heady mix of books, print, TV and new media, he never let FOOD go out of sight or mind! At 22, he got appointed as the editor of Bombay magazine. That made him the youngest editor in the history of Indian journalism. Then he turned 30 and the editor of ‘Sunday’, which was the newsmagazine that ABP group published. Thanks to his editorial role that led the paper become the largest-selling English newsmagazine in India. He ascended the ladder soon after to become the Consulting Editor of ABP. ‘Hindustan Times’ happened in 1999 wherein he was appointed the Editor. Though he stepped down from his role in 2003 but till 2007 he kept the legacy of the paper alive as the Editorial Director. In fact, it was during his tenure that ‘HT’ opened multiple editions with new ones in Kolkata, Chandigarh, Bhopal and Ranchi, and Bombay became the second largest-seller.

His role in HT was plain advisory, but he continues his work as a regular columnist there and several other papers too. Alongside was a parallel career in TV right from the time of ‘Sunday’. From anchoring ‘Question Time’ on Doordarshan and CNN to moving over to channels like Star Network with ‘Spar Talk’, ‘Cover Story’ and ‘Veer ke Teer’, Vir managed everything quite successfully. Even NDTV network saw him in ‘Face the Music’,‘One on One’ on NDTV 24×7, ‘Tycoons’ and ‘On the Record’ on CNBC. Just last year, Vir has been associated with CNN News 18 as the Resident Commentator hosting the political show ‘Virtuosity’ on a weekly basis.

He is the recipient of a number of awards for serving and enhancing Indian journalism. The list includes Rajiv Gandhi award, Lokmanya Tilak Awards and numerous others. In the days to come, he will continue fetching more and there’s no doubt about it.

There’s another side to Vir that perhaps most people aren’t aware of. In fact, a hint has also been given earlier! He is India’s top food critic with several dedicated food columns in reputed news papers and journals to his name. For gastronomes who take an avid interest in food, ‘Rude Book’ by him is a top favourite owing to the vast collection of these columns. He won the Cointreau Award for ‘Best Food Literature Book’ and also the ‘Best Food Critic’ award from Indian Culinary Foundation. Foodies should also check out successful TV shows like ‘A Matter of Taste’ and Vir Sanghvi’s Asian Diary on Discovery Travel Living Channel. The India-Pakistan cooking competition ‘Foodistan’ on NDTV in 2012 had him as the lead judge. Also, the online restaurant reservation platform ‘EazyDiner’ (2015) featuring curated content and expert opinions take pride in having him as the co-founder and lead critic.

Reading enthusiasts should also explore the man via books authored by him like ‘Men of Steel’, one of the biggest paperback sellers in Indian publishing history; ‘Madhavrao Scindia: A Biography’ and ‘India-Then and Now’.

Vir Sanghvi is presently a member of the Broadcast Content Complaint Council (BCCC), which regulates content on entertainment TV channels. His success story is not complete yet for it’s certain he will set more standards and examples with the passage of time. For now, his columns, books and of course, social media sites and blogs will work good in order to know him further and his relentless struggles in boosting Indian journalism.

A penchant for the pen has led Trinanjana to scale new heights of creativity. Apart from being the Content Writer & Faculty (Media Studies) at iLEAD, she’s an avid blogger and movie buff. When she isn’t busy writing or teaching, she prefers to wow listeners as a radio presenter in AIR for Western Music programs and a VO artist for endless number of shows. A travel freak, voracious reader and culinary comforter, there are myriad other interests that define this young woman